Posted by Wanjiru Kinyanjui In Blog
Share this on WhatsApp

One delightful element about Kenya’s food is its diverse flavor. Kenyan cooking draws upon a variety of ethnic traditions merged with the seasonings and tastes of outside countries.

Because of Kenya’s long-standing relationship with foreign settlers and its colonization by the British, the taste, cooking methods and presentation of Kenyan foods have been greatly influenced by the Indians, Arabs, Europeans, and Pakistanis as well as some western countries.

Kenyan food is mainly traditional and nearly all of Kenya’s tribes boast a specific meal as their very own staple food. Typical Kenyan cuisine is readily available in almost every Kenyan eatery; you can find it served in restaurants, hotels, clubs and entertainment venues with an African flair. If you’d like to try cooking on your own, here are a few simple and popular Kenyan Recipes you can try at home.

The most popular foods in Kenya are fresh foods from the country’s vast resources. Farmland, lakes and the Indian Ocean provide readily available vegetables, fruits, and meats. Often, the ingredients used to prepare a Kenyan dish are fresh, very cheap and easily used to make a quick meal. Common vegetables include kale, spinach, cabbage, tomatoes, beans, potatoes, avocados, and other leafy greens, while beef and goat meat are the common meats served in a Kenyan meal. Fish, chicken, and mutton are available but are more expensive.

Tropical fruits such as mangoes, oranges, pineapples, bananas, papaws, and pears are cheap, plentiful and popular on Kenyan tables, their availability dictated by the season. Other ingredients used in typical Kenyan dishes and recipes include rice, cornmeal, and wheat and millet flour. Kenyans are avid tea drinkers, thus hot beverages such as Kenyan tea and coffee are often served with meals. Cold beverages like soda, juice, and domestic and international beers are also available in restaurants, hotels, pubs and entertainment spots. Tusker, a Kenyan beer, is the relaxing beer of choice for most Kenyans.

What About Other Foods?

Adventurous meat eaters can also indulge in safe wildlife game meat, such as crocodile and ostrich, served in specialized restaurants. Game meat is rarely eaten in Kenyan homes. While most ingredients are used for ethnic food preparations, Western foods such as french fries, burgers, pizza, and pasta are readily available in some restaurants and fast-food places. 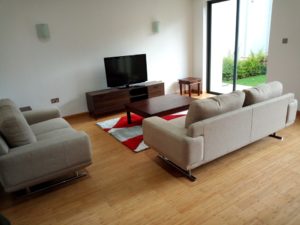 Where Can You Enjoy Ethnic Kenyan Food?

Everywhere in Kenya! In restaurants, hotels, and lodges, elaborate buffets and à la carte menus of Kenyan food are part of the meal offering. If you are new to Kenyan food and want to experience a truly ethnic meal, then you should visit one of the eating establishments frequented by local Kenyans. Nyama Choma and ugali top the list of popular Kenyan cuisine and are a “must eat”.

Where Can You Enjoy other Foods in Kenya?

If you’re not in for Kenyan taste, international foods are available in fast-food restaurants, cafés, hotels and world-class specialty restaurants across the major cities of Nairobi, Mombasa, Eldoret, and Kisumu. You will always find a meal that you recognize and enjoy in the Italian, American, Indian, Chinese, Thai, Japanese, European, French, Mexican, Korean, Lebanese and other western restaurants. There are enough choices of food to delight vegetarians, too. The world-famous and one-of-a-kind game meat restaurant in Africa – the Carnivore – is popular for its tasty selection of wildlife game meat. At the Carnivore restaurant in Nairobi, Kenya, you can savor bountiful meals of antelope, crocodile, gazelle and other wild meat.

If you are in Nairobi and wondering where to find a good restaurant, take a look at this Restaurant Guide of Nairobi’s best eating establishments. Nairobi offers a number of Kenyan, Chinese, Continental, Ethiopian, French, Italian, Thai, Japanese, and Indian restaurants, serving everything from seafood and grilled game-meat to organic food. International celebrities, including Kenya’s most famous and powerful people, have eaten at these establishments and you, too, can dine like one of them in Nairobi.

**The Restaurant Guide is a downloadable .pdf file courtesy of Business Daily – www.bdafrica.com